Send Us a Mail

Aqualite Impact Protection Film has been specially and uniquely formulated to withstand forceful blows through impact or dropping & of course the constant tapping and typing that so many modern LCD and LED screens undergo.

Whether the screen on your handheld device or your interactive touch screen dispaly is tapped by a stylus or by the tips of fingers, Aqualite Impact Protection Film will render scratches and other forms of damage to your screen a thing of the past. You’ll also find the appearance of fingerprints significantly reduced.

Aqualite Anti Glare Film comes from its microscopic slightly rough surface, which works to scatter reflected glare in any number of differing directions. The end result is that the ill effects of reflected glare are greatly minimized. Aside from simply minimizing surface glare, however, Aqualite Anti Glare Film coating will also reduce the appearance of reflected images on to your screen.

Viewing angles and the working experience will be greatly enhanced, and you’ll never need to hold or position your screen just so in order to reduce glare or mirrored reflections. 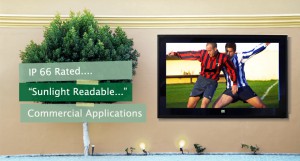 By installing an outdoor TV display screen publicans and bar owners can attract customers and boost pub takings during the 2020 Euro football finals this summer. more on anti glare TV screens for pubs

Aqualite's range of impact protection coatings and shock absorbing film will withstand the impact from a force ten times greater than a hammer blow. read about preventing damage to all sizes of LCD & LED screens