Below are a selection of reviews and testimonials of our range of anti glare and non reflective and protective films, filters and coatings. Ideal for domestic home cinema systems and international TV studios, the Outdoor Screen Company range reduces glare and reflection by up to 90%. Please call us to find out more. 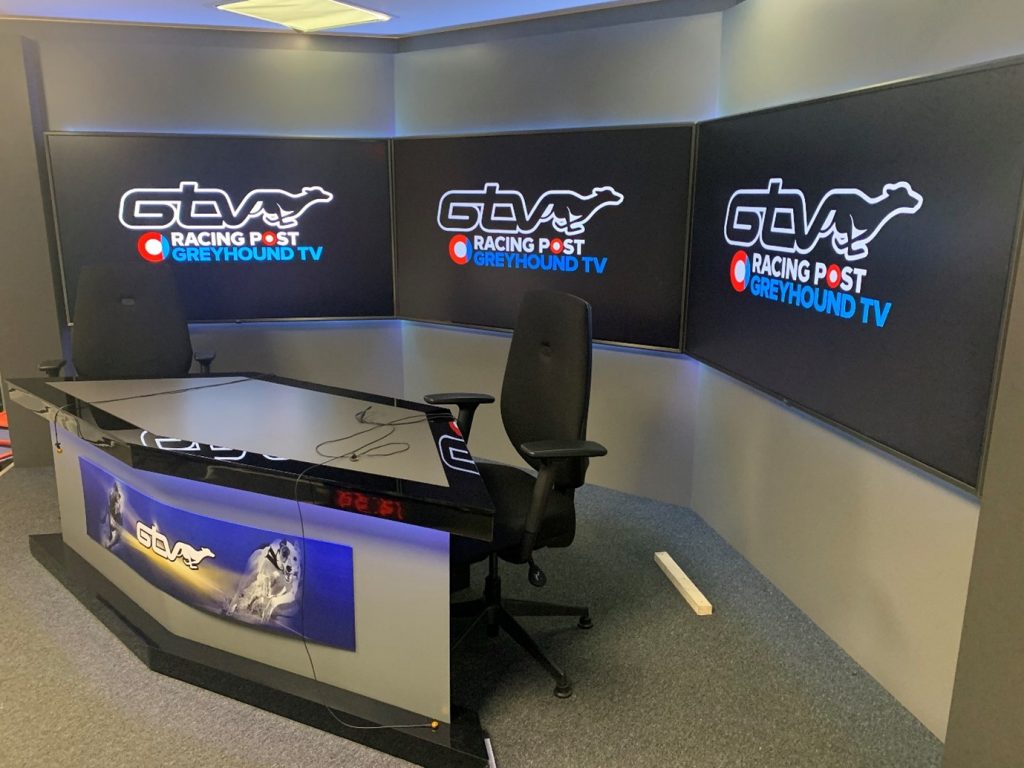 “Our 75 inch LCD screens were a nightmare as they were placed at 45 degree angles to each other so each screen reflected in the other!   Allied to that the studio lights also reflected in the top part of the screens. The use of the anti reflective coating has been a life saver.  Although I was a bit surprised by the quote it has proven to be worth every penny” Clive Lawrence (Racing Post Film Studios) 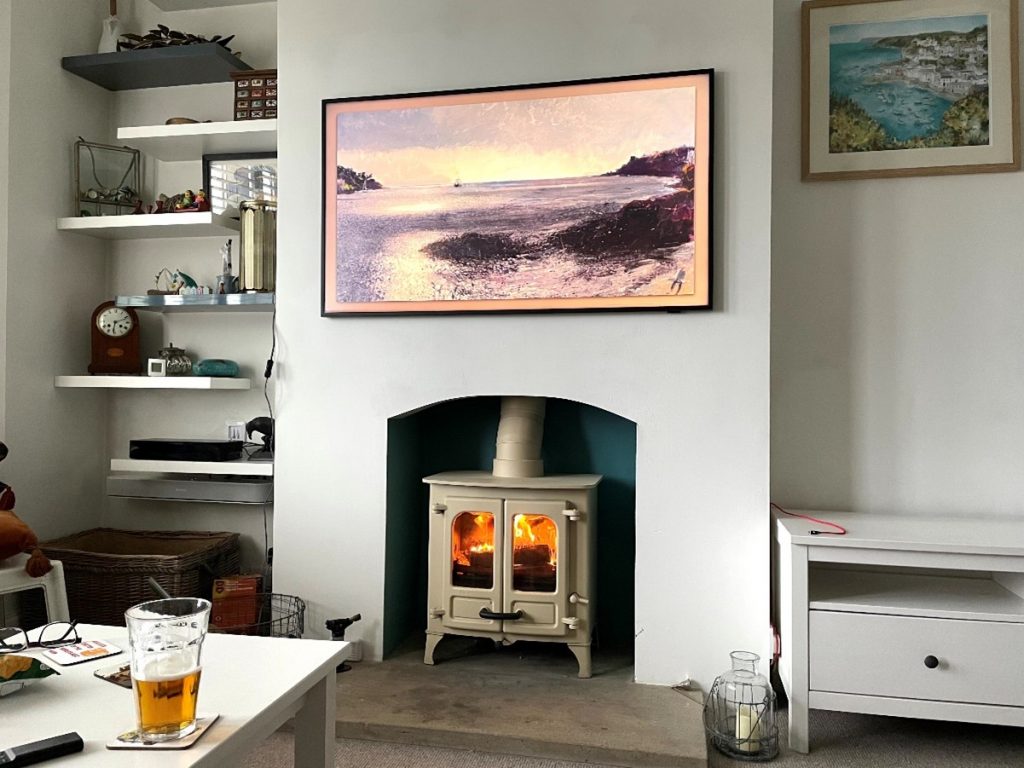 “Our new TV shows artwork when it is not being a television but we were disappointed to discover that it reflected so much light from the windows that it wasn’t really working very well. The anti-reflective film solved this problem and greatly enhances TV viewing in bright conditions. It does need to be applied very carefully but it is worth the effort and price.” Charlie Major 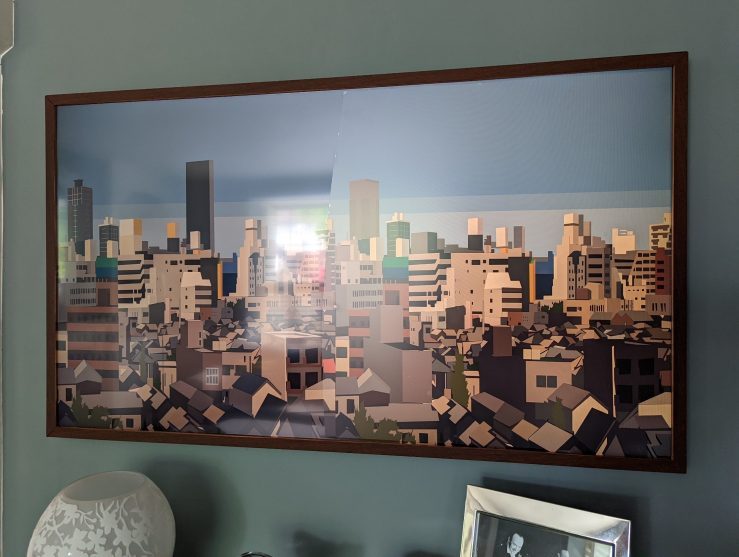 I have a Samsung “The Frame” TV, which, when it’s not on, is meant to look like a framed piece of art on the wall. It’s a lovely bit of kit, but unfortunately, it suffers with glare like any modern television. Ours is mounted directly opposite a very large bay window, and, not only does the glare make the ‘art’ illusion very unconvincing, it makes it hard to enjoy the TV for watching, well, TV.

Recently the manufacturer came out with a new version of the TV which has a special anti-glare coating… and I had instant buyer’s remorse. I just couldn’t justify getting rid of an entirely good telly that was only 5 months old just because of glare, and spend literally twice the amount I had already forked out. Then I came across the anti-glare film that the Outdoor Screen Company sell and I thought I’d take a chance on it. I have used wet install screen protectors on my phones before and I know that this makes it a lot easier to install these films without making a total hash of it. 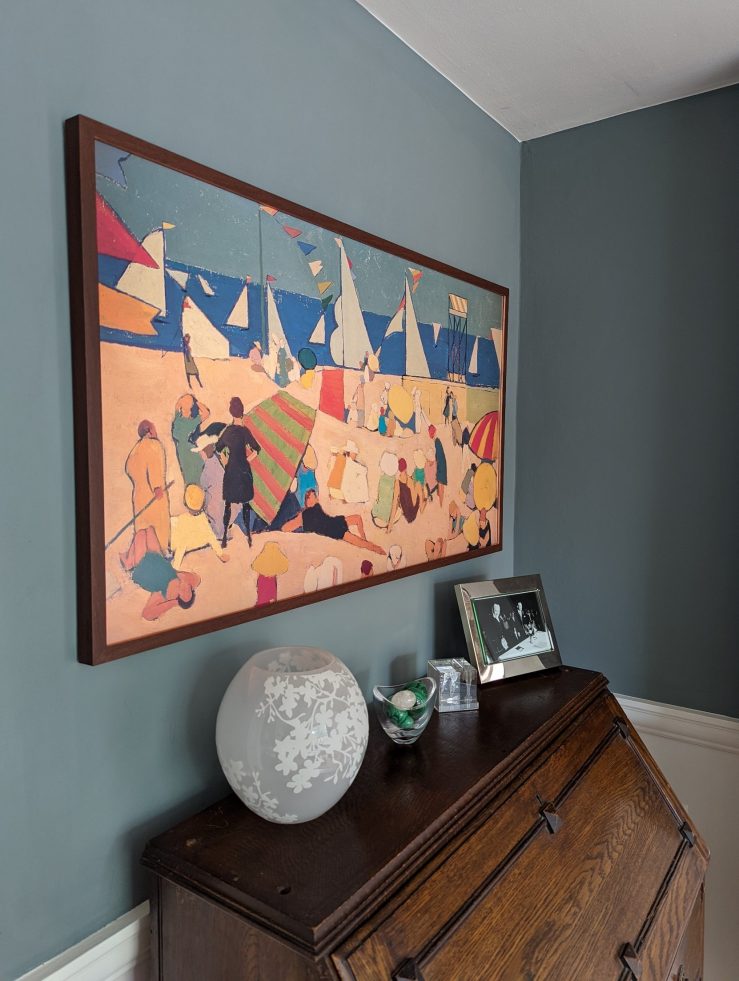 I couldn’t be happier with the result. In one picture above I have only half of the film on. I had a small problem with my first attempt at installation and the Outdoor Screen Company were kind enough to send me another film. While I was waiting, I thought I’d remove half of the film to give a proper side-by-side comparison. It was very, very convincing! The glare was completely removed, the colours still as vibrant, and the ‘art’ – well, looked like art.

I have now completed my install, which went flawlessly (if you follow the instructions and are patient). As you will see from the other picture – it looks terrific! I had been unable to find a similar product anywhere else – and I’m glad that I took the punt on it. Yes, it’s not cheap. However, the product really is very, very good. So, in my opinion at least – if you’re suffering from glare on your telly, or you have a specific requirement like mine, go for it!  Brian Saccente-Kennedy 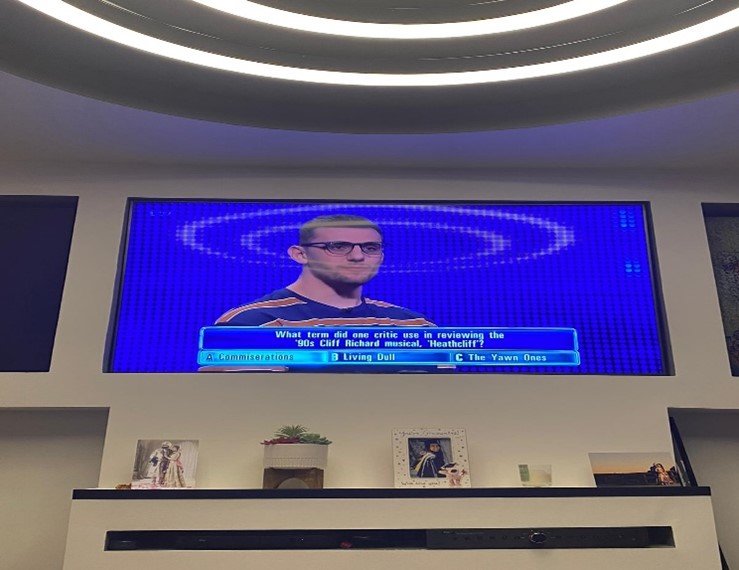 “Very impressed with the product , didn’t expect to be this good”. Chirag 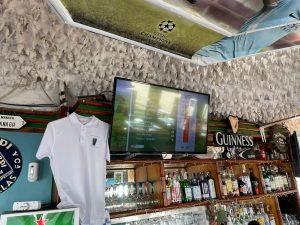 “ …  having a beach bar and showing daytime football matches has a series problem with reflection and made it unwatchable so looking for a solution I found The Outdoor Screen Company and after sending a message I got immediate response and a detailed explanation of the products and how they work so I purchased and received a fast delivery and when I was installing the anti-glare film on my TV the company was there on the phone to talk me through the job. I received good service and always a quick response to any questions I had so I really recommend this company and their product to anyone who has reflection problems on their TV screens.” Darran McMillan, Paddy`s Bar in Maspalomas, Gran Canaria 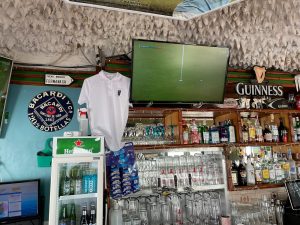 “The whole team at The Outdoor Screen Company were helpful and supportive from the beginning. Providing a wealth of knowledge and resources to enable us to make the decision right for our business. The screens works great and the benefit of the anti glare has been great” George at “Papa`s Fish & Chips”

‘ The AR film made a big difference in allowing us to use the T.V outside. The customers were very happy with the result’ Ryan from the Black Swan pub in Oxford

“Arrived & fitted. Does the job “ Kieran

Terms & Conditions
Please TEXT or CALL us on WhatsApp if you need some help?